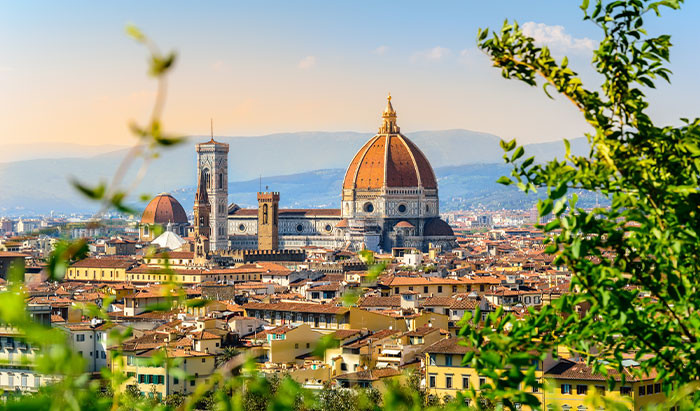 Did You Know? Brunelleschi's Dome is the World's Biggest Dome and Made Entirely Out of Bricks!


Yes sir! Brunelleschi’s Dome is the world's biggest masonry dome to date and Brunelleschi - the founding father of Renaissance architecture - managed to design the construction of the dome without the use of any support structure more than 500 years ago!

It was obviously a great challenge, and the risks that a dome weighing tens of thousands of tons would slope inwards were very high. In addition, the dome had to be built on the octagonal floor plan dictated by the existing walls. A real undertaking!

So in 1418 the Florentine fathers announced a contest for the ideal dome design, with a prize of 200 gold florins for the winner. Many leading architects presented their ideas, one of them proposed to support the dome with a huge pillar in the center of the church; another architect suggested building it out of sponge-stone. There was also an architect who said he wanted to use a mountain of soil and coins as scaffolding.

The proposals were many and some of them very interesting, but eventually the dome of the Cathedral of Santa Maria del Fiore was designed and built by Filippo Brunelleschi. He actually promised to build two domes, one inside the other. Although he was described as a buffoon for his absurd statement, everyone knew he was a genius, so in 1420 he became the superintendent of the project.

Brunelleschi wanted to highlight the symbolic importance of the building and he definitely succeeded! The dome has been overlooking the entire city of Florence for centuries and it was built almost 55m above the ground, on top of the existing walls. It has an outer diameter of 54.8 metres and an inner one of 45.5 metres. It took 16 years for the dome to be completed.

Begun in 1420 and completed in 1436, Filippo Brunelleschi’s Dome, is part of the marvelous Cathedral of Santa Maria del Fiore, a UNESCO World Heritage Sites, along with the Baptistery and Giotto’s Campanile, which are part of the cathedral complex in Piazza del Duomo.

Florence is celebrating the 600th anniversary since the construction work began on Brunelleschi’s Dome, and we are proud and glad to be able to offer you unique experiences which you will never forget! Whether you want to visit the inside of the Cathedral of Santa Maria del Fiore after its closure to the public - After Hour Visit of the Florence Cathedral - or observe the majestic Dome from the sky standing in a wicker basket thousands of feet up in the air - Tuscany From the Sky - we can make it possible for you!
DISCOVER ALL STORIES
COMPANY PRESENTATION